Bioremediation of Chloroethenes via Groundwater Recirculation Field Demonstration in Denmark 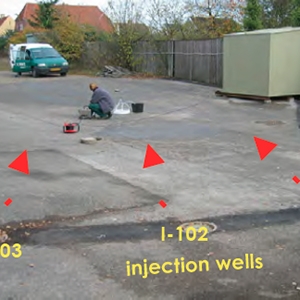 Bioremediation of Chloroethenes via Groundwater Recirculation Field Demonstration in Denmark

There are more than 11,800 sites in Denmark where groundwater supplies are known to be contaminated, an estimated 1,400 of which are contaminated with chlorinated solvents.

Accordingly, remediation of contaminated groundwater is an important priority in Denmark, as more than 90% of Danish drinking water is derived from groundwater. Biological in situ enhanced reductive dechlorination (ERD) has been recognized as a potentially cost-effective technology for remediating chlorinated solvents in groundwater. However, the capabilities of ERD as a groundwater treatment technology had not been rigorously demonstrated in Denmark.

Consequently, the Danish Environmental Protection Agency and the former Funen County commissioned a field demonstration to quantify the performance of ERD at a Danish site. A team of bioremediation experts consisting of Geosyntec, COWI A/S, and the Danish Technical University was selected to conduct the demonstration.

The demonstration was performed at a former industrial site where the chloroethenes cis-1,2-dichloroethene (cDCE) and vinyl chloride (VC) had impacted a secondary groundwater aquifer upgradient of a municipal drinking water supply well.

Geosyntec directed the design and overall demonstration approach for the project. To maximize the chances for a successful demonstration, we specified that the ERD design use a closed-loop groundwater recirculation to deliver electron donor (sodium lactate) to the target treatment zone.

A naturally occurring bacterial strain, Dehalococcoides can degrade chloroethenes to innocuous ethene and ethane. Geosyntec directed numerical groundwater flow modeling that was used to design the layout of the recirculation injection and extraction wells and system flow rates. The firm also designed the electron donor and bioaugmentation dosing for the system. In addition, Geosyntec practitioners were substantially involved in the performance monitoring design and results analysis.

Geosyntec led the design of the first rigorous demonstration of ERD in Denmark. The project also represented the first use of in situ bioaugmentation in Scandinavia. Although the demonstration was performed duringr a short duration of seven months, it was considered to be highly successful, as more than half of the cDCE and VC in the treatment zone were converted to innocuous end products, and substantial growth in Dehalococcoides was observed throughout the course of the demonstration.

The project was also one of the first to demonstrate the critical role that Dehalococcoides containing VC-reductase (vcrA) genes play in ERD performance in the field. Geosyntec co-authored a journal article in Environmental Science and Technology that described the high-quality experimental approach and data generated in this project.

On the basis of the highly successful results of Geosyntec’s design, ERD is widely used for chlorinated solvent remediation throughout Denmark.